How I got into 3D printing 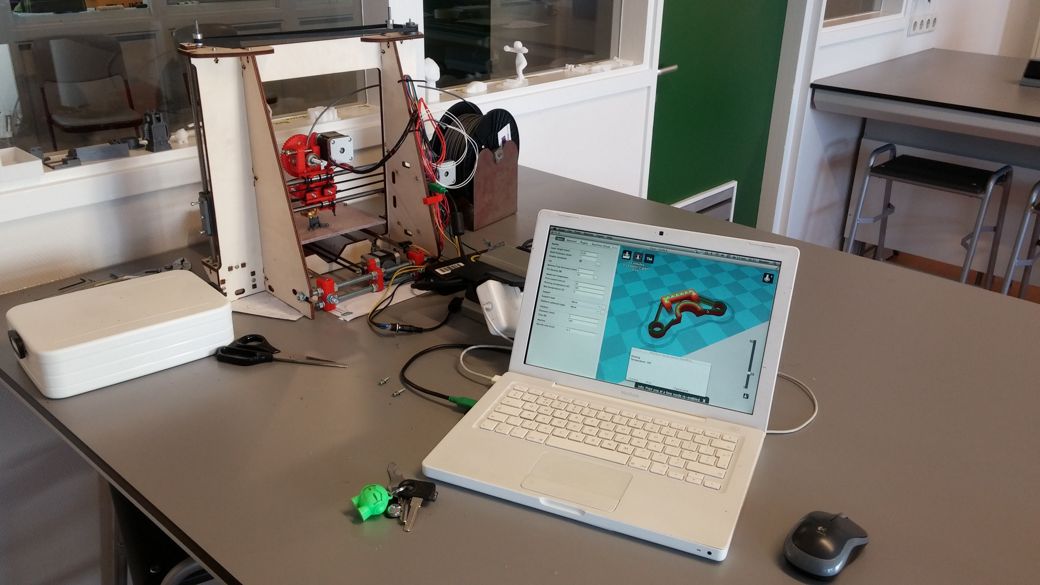 This is a background story. I’m working on a few projects that will have posts about them soon, but in the meantime I might as well tell something about how I got here.

Repeating a year in school is the nightmare of many kids, at least it was mine. Nevertheless it has an important part in this story.

In the year 2015 I was in 4th grade (Dutch system). I’m not going to explain why because I don’t want to inspire anyone to follow me in doing this (wink), but at the end of the year when the grades came in I got a call that I had to repeat the year.

I didn’t really pay too much attention to it during the holiday, but starting school doing the same things I had done the year before felt like going backward. I’ll spare you the details but it wasn’t fun… so I more or less tried to make it fun for myself. I tried streaming for a while, reorganized my room, tried writing hardware reviews, started pulling electronics apart, and joined a hackerspace.

A few months later, I noticed a weird machine standing in the window of the physics lab. For a couple of weeks it remained a weird machine, but then I asked my teacher about it and he told me it was a 3D printer which he got from a workshop but he didn’t really have time to do anything with it. He recognized my immediate interest and asked if I’d like to tinker with it.. I think you can guess my answer. ;)

The machine wasn’t in very good shape at the time. It had been screwed together during a workshop and hadn’t really gotten much attention since, but it is clearly recognizable as some sort of Prusa i2 clone.

I started to come to the lab during breaks, and sometimes I stayed after school, to work on it. I had downloaded Ultimaker Cura and tried printing small objects like the Ultimaker Robot and the 3DHubs Marvin. In the beginning, it would randomly disconnect or reset during prints, so I replaced the USB cable. It produced skewed and ragged prints, so I rebuilt the frame. The ABS bed had been damaged and prints wouldn’t stick, so I flipped it and put skotch on it. The outer walls showed stubs, so I replaced the flattened hobbed bolt by a nice, round one.

At this point, it could produce decent quality prints. It wasn’t great, but consistent. I was then challenged by a teacher of a different subject to find a project for myself using the printer. That triggered me to learn to design 3D objects myself. I first tried OpenSCAD, which worked but had a pretty steep learning curve. The first part I ever designed was a replacement for the Z-axis endstop mount of the printer, which was really crappy at the time and caused problems with the height for the first layer.

Later I came across Onshape, a web-based CAD program which is functionally similar to Solidworks (and free for students, hint hint). It has so many features I didn’t really know what buttons to click at first, but if you know the most basic operations then the rest isn’t that hard anymore. Also, everything is well documented, so if you don’t know what a button or value does, you can just google it or search the help section.

The list of modifications I performed in the first and following years until my graduation is very long. At some point I had replaced all the parts except for the static parts of the frame and the stepper motors. I had also learned a bit of C, forked Marlin (firmware for Atmega-based 3D printer controllers), and modified the PID controller for the heating elements. Sadly my pull request never came through. ;) Over time, I developed a feeling for finding the cause of imperfections in 3D prints, and now and then I was asked to look at other people’s printers. I also came to realize, however, that buying a new printer is sometimes cheaper than improving an existing printer to output the same level of quality.

When I graduated, the teacher gifted me the printer as I was the only one who knew how to maintain and use it. I still have and use it today. :)

Hi, my name is Reinier and I am the creator of Pwutseltronics